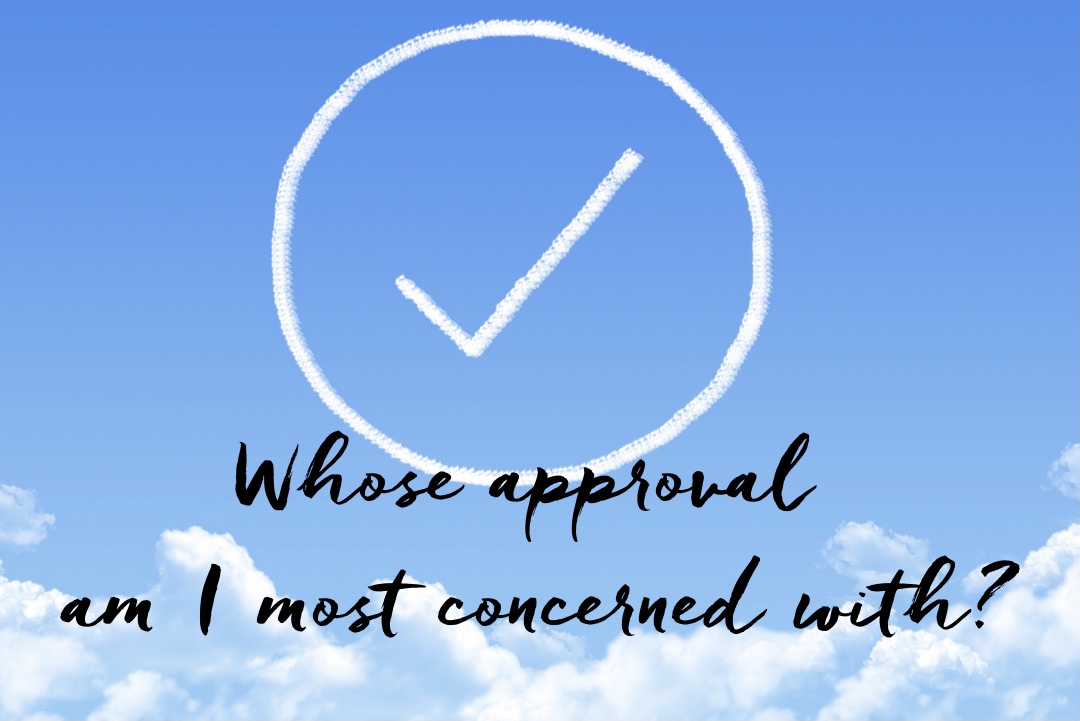 Voices. They ring in my ears and shout in my mind. I don’t seem to be able to rid myself of their pressure. They want to be my guide, to instruct me in what I ought to do. They cajole, threaten, rationalize, alarm, accuse and soothe me at different moments. Often the easiest thing to do is submit to their demands. Is this my version of going crazy? Or is it an internal obstacle course that every human navigates? When I stop to honestly examine what’s going on, I find the common thread of these cries to be distress and anxieties about what others think of me. They’re powerful. And they expect to be obeyed.

The closest explanation I find in the Bible labels what I’m experiencing as the “fear of man.” This sensitivity to others’ opinions and voices works to keep me on a certain path. Where this road leads, I have no idea. I just know that it feels intolerable to stray from it. Only later, sometimes much later, I realize it has taken me to places I didn’t want to go. I then see that I was listening to the wrong thing.

“Fear of man will prove to be a snare, but whoever trusts in the Lord is kept safe” (Proverbs 29:25).

The Bible reveals that there is a trap laid for me, and I must be alert. If my ultimate concern when making decisions is appeasing the voices of people (be they inside or outside my head) I will eventually be caught in something that keeps me from going where I truly need to and want to be. And it will be exceedingly difficult to get out of it. How to avoid such a snare? Trust the Lord and not the smooth-sounding or coarse-accusing voices ringing in my ears.

Fear of Man vs. Fear of the Lord

The idea of “fearing man” does not necessarily mean being afraid of people (or the male gender in particular). I understand it to be more about holding certain people’s opinions in high regard, to the point of letting them be the final say in what I do or don’t do. Who are those who have this kind of power in my life?

They’re the ones with whom I have the most social capital invested. They can also be the ones that intimidate me the most. They know how to push my shame buttons or even inflame my anger. They can be the non-specific, disembodied group always looking over my shoulder, quick to shake their heads in disapproval. They ridicule choices I make or opinions I hold but soothingly nod approval when I submit. To disregard their voice (or at least the voice I believe is theirs) feels disorienting, scary, intolerable. I usually have many rational-sounding reasons for why it makes sense to fall in line. Another way of saying it: the “fear of man” is the worship of people’s approval, be they a real or imaginary group or a judgmental individual in my face.

The Bible also speaks of a concept called the “fear of the Lord.” This does not necessarily equal feeling afraid or intimidated by God. But similar to the “fear of man,” it means to hold God’s opinion highest in respect above all other real or imagined opinions. It means to be most concerned about how He will respond to any decision I make or activity I involve myself with. Thus the “fear of the Lord” is the opposite of the “fear of man.” Choosing to cultivate this mindset and heart attitude of honoring God is the way we avoid the trap. “Fearing” Him in this way is how we express our trust in the Lord.

The Single Concern of Joseph

While there are many illustrations of “fearing God” in the Bible, I want to highlight one. In Genesis 39:1-18 we’re told that after being sold into slavery by his brothers, Joseph was purchased by a wealthy Egyptian named Potiphar and made chief administrator of his household. We’re also told that Potiphar’s wife tried to seduce Joseph one day. He responded by simply running away. But she kept hold of his cloak and then used it as evidence that there had been an attempted rape. As a slave, there was no due process, and Joseph was thrown in prison. While most people know how the story takes a miraculous turn in the end, exalting him from prisoner to second in command of the entire country, it’s Joseph’s response to Potiphar’s wife I focus on here.

Genesis 39:8-9 says, “But [Joseph] refused and said to his master’s wife, ‘Behold, because of me my master has no concern about anything in the house, and he has put everything that he has in my charge. He is not greater in this house than I am, nor has he kept back anything from me except you, because you are his wife. How then can I do this great wickedness and sin against God?’”

Joseph acknowledged that he was being treated quite well by his master and insinuated that to give in to her enticement would be a serious breach of trust. But WHO is he most concerned about offending? He understands that the One who sees all has a clear opinion on what is the right thing to do in this situation. Joseph cares more about what God desires than what Potiphar’s wife or even he himself might want in a moment of lustful passion. So he runs. And because he “fears God,” he also honors the people who have trusted him, though they don’t see it yet. God, however, honors Joseph in the end beyond anybody’s wildest expectations. God watches and cares. This then is a picture of the “fear of the Lord” at work in someone’s life—initially difficult and even painful, but so rewarding in the end.

Do I honestly believe that God observes every detail in my life? This is another way of understanding the “fear of the Lord:” God sees all I think and do, caring deeply about my response to everything that comes at me—and I fear Him by living my life according to this belief. I thus grow closer to God, learning to care about what He cares about and dislike what He dislikes.

Since in American culture the phrase easily stirs up images of responding to a harsh, maniacal, spiritual ogre, I unfortunately don’t hear a lot about “fearing God” in Sunday sermons. And I definitely don’t get any guidance in how to do it from the general culture around me. I learn in Psalms 111:10 and Proverbs 9:10, however, that the “fear of the Lord” is the beginning or foundation of wisdom. So, it’s the place to start when I desire deeper understanding of life. Respectfully going to God first for guidance in all my reactions, responses, pursuits and beliefs is how I deepen my connection with Him, make better decisions, live out right relationships and do all of life better. His Word is the reliable revelation of what He desires, if I will only care enough to find out what He thinks.

The multitude of voices crying out to influence your behavior will never stop. But if your greatest concern is bringing joy to God’s heart, you can learn to ignore the sounds that don’t fit who He is and who He has called you to be. “Fearing the Lord” teaches you how to genuinely love others since that is what is on God’s heart. He’s speaking, and you can hear, if you will tune out the other sounds and listen to Him first.

Category: Daily ChoicesTags: Caring about what God thinks, Fear of God, Fear of Man, Fear of the Lord, Fear of what people think, God Fearing, Going to God first, Guidance from God, Honoring God, In Awe of God, Pleasing God, Respect God, Respecting God, The Beginning of Wisdom, The Foundation of Wisdom

← Choosing to Encourage
Choosing Not to Hurt God’s Heart →